A somewhat anachronistic clock set into a medieval-looking tower and reflected in the water. Image from: https://pxhere.com/en/photo/1388017.

Beowulf reviews the treasures that Hygelac gave him and how he raised his reputation in countless battles.

“‘The treasures that Hygelac granted me,
were payment for my role in that war, all of which fortune allowed me,
I won it for him by flashing sword. For that he gave me land,
a place to be from, the joy of home. Thus, for Hygelac there was
no need, no reason to be required to seek someone from the gift house,
or the Spear-Danes, or the Swedes for worse war-makers, my worth was well-known.
Always would I go on foot before him,
first in the line, and so shall I do ‘til age takes me,
so shall I conduct war, as long as this sword survives,
that which has and will endure.
For this is the sword I held when I, for nobility’s sake,
became the hand-slayer of Day Raven the Frank.
No treasure at all did that warrior
bring back to the Frisian king.
No breastplate could he have carried,
for in the field he fell as standard bearer,
princely in courage. He was not slain by the sword,
but instead a hostile grip halted the surge of his heart,
broke his bone-house. Now shall the sword’s edge,
hand and hard blade, be heaved against the sentinel of the hoard.’”
(Beowulf ll.2490-2509)

First, reading this passage really confuses me about the timeline of Beowulf’s life story.

Wasn’t Hygelac lord of the Geats when he was over in Daneland, fighting the Grendels? And didn’t Beowulf go over there when he was just a teen?

If those two things are true, then Beowulf must have been something like a squire in that battle with the Swedes. He must also have been a pre-teen then. Or, at the youngest, 13. I mean, he was also supposed to be the runt of his generation, and one whom the elders of the Geats doubted.

But if all of that’s true, then how much more land did Beowulf get from Hygelac after returning from Daneland? And if he already had land and treasures before going to Daneland why would the elders of the Geats be so doubtful about him?

Along similar lines, did Beowulf fight Day Raven before going to Daneland, too? Is that where he gained the reputation for having the strength of 30 men in his hand-grip? Or when Beowulf dropped his sword to manually throttle Day Raven did the gathered crowd cheer and whoop, knowing what was coming?

Honestly, if anyone has a better grasp of Beowulf’s timeline, please do get in touch.

Setting aside concerns about when the events of Beowulf’s life happened, he seems to have had a rich life of fighting just as many non-monstrous as monstrous opponents. So I wonder why the poet decided to go down the monster route.

Perhaps it was a matter of interest.

We have so few poems and stories from the Old English-speaking Anglo-Saxons. So it wouldn’t surprise me if their world of stories was flooded with historical or political romps and Beowulf was meant to be something that broke out of that.

Or, maybe this poem was supposed to be a fusion between what then passed as history and their common mythology?

Next week, Beowulf tries to pump himself up with a speech to the other Geats with him on the cliff.

The first page of the original Beowulf manuscript, in Old English. Image from http://bit.ly/2jdxSdW.

I am, at best, a lapsed Catholic/Greek Orthodox Christian. But, I still find a lot of Christianity’s source material interesting. So, when I went searching for Beowulf news and found this post from patheos.com entitled “The Use and Purposes of Scripture: Part One”, I read right through it.

In this article Henry Karlson writes about how a literal reading of scripture either as a source of history or of laws is missing the point. Instead, he argues, the contradictions and various situations concerning similar events that come up in scripture need to be read together and taken as a whole rather than merely as parts. Ultimately, to back up his take on reading scripture, Karlson refers to Beowulf. In particular, he refers to the changes that Beowulf underwent between its origins and the version we have today.

Karlson then uses this analogy to say that the changes made to the scriptures didn’t undermine its authority in the same way that the transformations that the modern Beowulf underwent haven’t undermined its authority. What kept me from just saying “pshaw, whatever” when I read this, though, was that Karlson cements this point with the idea that the Church was just practicing good storytelling when it took all of the various stories and writings that became the scriptures and joined them into a single book.

Those same story-telling principles were guiding those who tinkered with Beowulf over the centuries. After all, Beowulf was restored to a mostly complete version from a single bound copy in a book of monsters and wonders that survived being worm-eaten, burned, and generally ignored as it changed hands over and over again.

Specifically, lines of the poem were clarified, different interpretations of the scribes’ handwriting were argued about, and references to other stories, history, and contemporary culture were worked out. All you need to do to see this sort of work on Beowulf in motion is to pick up an edition from the middle of the 20th century or earlier and flip through the notes. You’ll find them full of arguments about things ranging from Beowulf’s descent into and return from the Grendels’ lair paralleling the crucifixion of Christ, to the lack of clarity about what is really going on in the Finnburh episode, to the discovery that “lindbord” in reference to shields indicated that they were made of linden wood.

And yet, the debate around which version of Beowulf is the most correct isn’t based on any historical level. Most of the changes that were made to the text are largely forgotten now. Which makes sense, since claims of authority are usually based on a version’s poetic merit. The Bible, on the other hand, is only rarely judged on its literary merits. Plus, only academics, poetry, and history fans are really interested in Beowulf, whereas more religions than I could count are constantly arguing about the authority of their version of the Christian scriptures.

In fact, as a poem and not a religious text, preferences for Beowulf just come down to which one is your personal favourite.

I really enjoy Seamus Heaney’s translation, but I’m sure that once I read more editions I’ll find another that I like even more.

The elasticity of such opinions leaves me thinking that all the various branches of Christianity are just practicing the same favouritism but on a massive scale, like people who pour their free time into a particular fandom and then build a world of fanfic around themselves and friends. 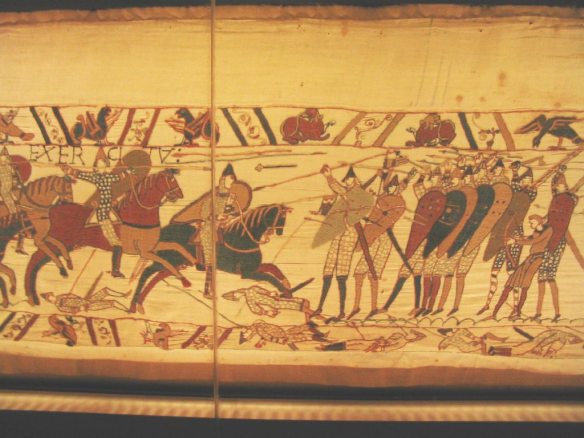 Throughout this blog, I’ve often written about history and Beowulf and how the two are woven together (like here and here). The post that I’m sharing this week pulls what I’ve weaved together in a tight, quick way.

This week’s post is a short piece by Jan Purnis (who appears to currently be a professor of English at the University of Regina) all about the historical figures in Beowulf. In this piece, Jan groups these figures together according to their kin group, and then explains how they are or aren’t accounted for in the historical records that we have of the early medieval period.

If you’ve read a bit about the history of the poem itself, you’ll know that there’s some controversy over when exactly Beowulf was first put together. Purnis doesn’t go into to much detail with it, but she does note that the Offa referred to in the poem could be either Offa I, fourth century king of the continental Angles, or Offa II, late eighth century ruler of Mercia (a kingdom in Britain). There was nearly 400 years between them, and in the story that runs from lines 1944-1962 the poet didn’t add an “I” or “II”. So this reference, like some others, doesn’t reveal much about when Beowulf was first thought up.

Nonetheless, Purnis’ conclusion that the poet uses their historical knowledge and references to bring an air of historicity to the wondrous Beowulf himself is a neat point. It’s the same sort of thing that historical fiction writers do today. They know the period and place that they’re writing about as best they can and then they add in their own characters or elaborate on actual figures to build a story. In my mind, this similarity just goes to show how much work has always gone into crafting stories.

Which makes me wonder why the poet wanted to write about a kind of superman whose world, as Purnis points out, was straddling the old Pagan/continental and the new Christian/British ones.

Maybe it was to legitimize the story. I mean, authority drawn from strong relation to the past was an important concept in the medieval world. In fact, that kind of legitimacy through relation to the past is a major reason why people like Offa II referred to Offa I as their ancestor (despite the 400 year and several hundred mile gap between them), and so maybe that was the theme that the poet had set out to tackle. Why then are there monsters in Beowulf? Well, who doesn’t like a good monster story?

If you want to learn more about the historical figures behind a lot of the cast of Beowulf, check out Purnis’ write up. Since it’s a bit on the academic side it comes with a list of sources for further reading, too.

If you could write a historical fiction story about any figure from history who would it be and why? Let me know in the comments! (Chaucer would be at the top of my list!)