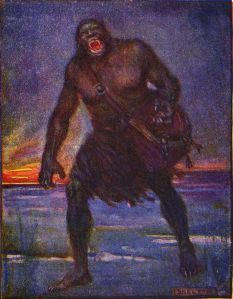 An illustration of Grendel by J.R. Skelton from Stories of Beowulf. Grendel is described as “Very terrible to look upon.”Stories of beowulf grendel” by J. R. Skelton – Marshall, Henrietta Elizabeth (1908) Stories of Beowulf, T.C. & E.C. Jack. Licensed under Public Domain via Wikimedia Commons.

In this week’s passage, Beowulf and Grendel shake Heorot to its very foundations.

“The noble hall resounded, all of the Danes,
citizens, each violently stirred,
all in broken ale-dream distress. Both within were warring,
fierce were the hall wardens. The room resounded;
that was a great wonder, that the wine hall
held out against those boldly brawling,
that fair house; but it was yet secure
inward and outward in its iron bonds
skilfully smithed. In there from the floor
were wrenched mead benches many, as I have heard,
each gold adorned, where the hostile fought.”
(Beowulf ll.767-777)

Back To Top
Clashing Hall Wardens

There’s a lot to write about this week. So I’ll see what I can do.

After a few weeks in which passages were fairly dry and straightforward, save for a word or phrase on which I could hang my fan theory hat, this week’s is rich and juicy.

First up there’s the word “renweardas” (on line 777). This compound word isn’t out of place being written of in this section, since its nature as a compound is fairly unremarkable. It’s not the word itself I’m interested in so much as how it’s been conjugated.

In context, “renweardas” is the “hall wardens” of its line in this passage, it’s the word that refers to the hall wardens currently fighting in Heorot. But why is it plural?

This is puzzling because you’d think that the poet would refer to just one hall guard: Beowulf. (Unless he heard a different version of events, but I’ll get into that in a bit.) With this plural noun there are two possibilities for interpretation.

The first is the wildest: the poet is referring to both Beowulf and Grendel with this noun.

At first glance this might sound crazy, but I think it’s possible that Grendel is being regarded as a hall warden in that whenever he’s in the hall no one else can get in. And what’s the definition of a great warden or guard? One who keeps the unwanted out. And Grendel does that wonderfully in Heorot, though his definition of “unwanted” is not the same as the Danes’.

Whenever Grendel’s been on duty at any point in the last 12 years, no one has been able to get into Heorot. He’s been keeping people out, but he’s been keeping people out of a place designed for joy and companionship and socializing. He’s keeping a tight guard on a place that really requires a narrower filter on the in-flow of people. And those people need to be in it in order for its function to be fulfilled.

With this in mind, I think the poet could be having a bit of a joke here. Or he might just be upping the ante and showing the binary forces that are here — a guard who is too perfectly and senselessly a guard (like a poorly programmed machine guard might be, actually) and a guard who is human and able to properly discern between friend and foe. If this is the case, then this isn’t just a fight between Beowulf and Grendel, it’s a fight between the old guard and the new — literally.

The other explanation of why “renweardas” is plural is because the poet is referring to all of the Geats. From his description of the tumult and madness within Heorot it definitely seems like people outside would guess that it was the noise of many in combat. Of course, its being only two introduces some nice dramatic irony in that the audience will clearly know that it’s just two combatants having one hell of a brawl.

And that brings me to another of the points raised in this passage. On line 776, the poet uses the classic filler phrase: “so I have heard” (“mine gefraege”).

It’s possible that this is just a throw away phrase used to round things out and to give the poet a chance for a breath in the midst of a very intense scene. But it’s in a strange place if you look at it logically.

How does the poet mean “so I have heard”? Is this second hand information? Was he there? Did he hear it from one of the Danes? Maybe one of the Geats?

In the middle of a scene that’s defined primarily by the intensity of its noise (enough to wake drunken Danes from their sleep), it’s kind of comical to be told that the teller you’re listening to has heard about what sorts of sounds were coming from this fight.

What do you think the phrase “so I have heard” is doing in this passage? Is it just filler, or is there something more to it?

Back To Top
A Rich Vein of Words

This week’s passage is rich in compound words, though they continue to be fairly straightforward. Nonetheless, the combination of words in each of these compounds does seem to suggest something that’s a little different from their modern English definitions, a shade of meaning that has since fallen away or been so well integrated into their new sense that it’s been forgotten.

The word “ceastra-buendum” is the first of these. It’s a combination of the word “ceastra” (“castle,” “fort,” “town;” “heaven” or “hell”) and the word “buendum (“dweller” or “inhabitant”). Together they make what dictionary makers agree is “citizens.” (remember how I said this week’s words are straightforward?)

But I think it’s instructive to drill down into this word’s meaning a bit. After all, if a citizen is necessarily a dweller in a town or castle but not a village why make the distinction?

I think part of the reason why is because a village or even smaller community of scattered people doesn’t have a strong central authority or clearly marked border. Speaking from my embarrassingly limited knowledge of medieval social structures at the level of government, such small organizations of people as villages or even just farms scattered across pasture land would have been related to a single lord or (later) a parish.

These institutions would act as central authorities, sure, but they’d still be ruling over a people that were few or that were scattered. Because of this, and because of these communities’ exclusion from “citizenship” in a sense, I think that to the Anglo-Saxon mind the word meant belonging to a strong amalgam of people who lived more closely together than disparate farmers or were longer than a village that even in the middle ages you might miss if you blinked while riding through on horse or in cart.

So “citizenship” isn’t just something you can apply to anywhere, it refers particularly to a strong centrally governed, populated place. There’s a certain civilized feel to the word, as if it could be placed on the opposite side of the spectrum from a word like “folk” and its implication of country people.

The people the poet’s referring to here, then, aren’t a bunch of bumpkins but instead a bunch of civilized, worldly people. In short, if you like, people you can trust to give you the facts straight without much embellishment. The sort of people you might want to “have heard” something from, in fact.

Next up is a word that I’m surprised didn’t transition more cleanly into Modern English. “Ealuscerwen” means what it may sound like: to be deprived of ale (in the sense that you are shorn of it (literally), that it is somewhat forcefully taken away from you). Clark Hall and Meritt define the word as “deprival of joy,” “distress,” or “mortal panic” and Wrenn cites many sources that suggest that the word is a metaphor for the distribution of bitter ale, suggesting that disaster follows grand celebration.

I think that when everyone is woken by Beowulf and Grendel’s brawl in the hall, they’re woken from a deep, drunken sleep and that is what they’re being deprived of: sweet sleep. And this is so disastrous because the sleep after drinking heavily at a party like the one thrown for Beowulf is one of the few peaceful experiences for the Danes.

After all, if you were living in a place that was regularly attacked by a monster at night who brutally killed and devoured any people he came across for a solid 12 years would you sleep soundly? I think a little nightcap might be pretty appealing then, and that parties like those thrown for Beowulf would be so enjoyed not just for the joy and fun and happiness experienced while drinking and socializing but also because of the joy of a deep sleep that you would truly enjoy because of its deepness. It would be the sort of sleep in which you’d forget all of your waking life’s problems. Being deprived of that sleep, an effect of the ale or beer you drank, but not the beer or ale itself, would be like having your greatest happiness snatched from you while you were in the middle of enjoying it. Truly a cause for great distress.

There’s definitely a sense of permanence about this word. It sounds like a house or castle that’s made of the very soil or made so solidly that it’s more a feature of the landscape rather than something on it. This word, I think, carries some hubris with it, though we don’t get any true foreshadowing of Heorot’s future until next week’s passage.

Lastly, I turn to the word “searoþanc,” a word that means “sagacity,” “ingenuity,” “skill” “cunning,” or “artifice.”

This one combines the words “searo” and “þanc” to deepen the sense of sagacity and skilfulness of whatever it’s being applied to. How? By expressing the idea of a person who’s so skilful they could do something with their eyes closed but instead they’re doing that thing with their full attention — guaranteeing that whatever they’re doing it will be utterly masterful.

What do you think of this week’s words? Should (or could) a word like “ale-deprival” make its way in Modern English?

Next week the poet dwells on Grendel’s defeat.