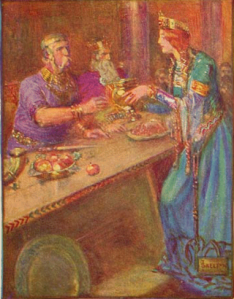 The lady of Heorot serving Hrothgar. It looks genial enough.

“Then in the hall was the treasure-giver joyed,
grey-haired and battle strong; consolation lived
for the ruler of the bright Danes, he heard in Beowulf
the guardian of the people’s steadfast hope.
There was the laughter of men, the roar of singing,
words were joyful. Then came forth Wealhtheow,
Hrothgar’s queen, mindful of her king;
she greeted the gold-ornamented warriors in the hall,
and the freeborn woman dearly/quickly gave
first to the lord of the East-Danes’ realm;
told him to be blithe at the beer-drinking,
dear to the people; he then turned more to
the feast and the hall-goblet, a victorious king.”
(Beowulf ll.607-619)

Back To Top
Hall joy and Hrothgar’s mood swing

In this week’s passage of Beowulf we take a break from all that dialogue and get some good old fashioned descriptive narrative. Hoo yeah!

So, in the passage Hrothgar responds incredibly positively to Beowulf and his boastful promise to destroy Grendel. I use “boastful” because, well, that’s still what his promise is.

Beowulf has shared stories of past victories with the Danes, but none of his fellow Geats have stepped up to back him nor has he shown any proof of these past victories. So far, Beowulf has just boasted expertly and looked the part of a warlike leader.

And that’s enough for Hrothgar. At the beginning of this passage he seems to be smiling benevolently at Beowulf. The poet even goes so far to say that Hrothgar saw in Beowulf “the guardian of the people’s steadfast hope” (“folces hyrde fæstrædne geþoht” (l.610)). It seems that after months, probably even years, of feeling utterly defeated at the hands of Grendel, this monster that listens neither to reason nor responds to human valour, he will finally find relief in this Geat.

This sense of joy and happiness then disperses itself throughout the hall and washes over the poet.

I’m not sure if the poem’s suddenly simple sentences (ex 1; ex 2) are a reflection of this joy or not, but I can see how they could be. In extreme happiness (especially that of the drunken variety that seems likely in the hall once the festivities start) it’s probable that the Anglo-Saxons abandoned their usual poetic wordiness in favour of more straightforward three word statements.

But then Wealhtheow, queen of the Danes, comes into the poem.

And for a brief second, for the space of maybe a line at most, it seems like that joy drains out of Hrothgar.

Already, unless I’m missing something, he seemed to be blithe and happy as he recognized in Beowulf the hero on which his people had waited. Yet Wealhtheow, when she serves him first from the beer jug, tells him “to be blithe at the beer-drinking” (“bæd hine bliðne æt þære beorþege,” (l.617)). Did Hrothgar slip back into his depression while the poet went off and described the general feeling in the hall?

I’ll cut right to it. I think he did.

But I don’t think gloomy thoughts stormed back in on him once the poet turned from him to the hall at large. I think the renewed furrow in Hrothgar’s brow is the result of Wealhtheow’s appearing. I think that she and Hrothgar are in the middle of some sort of spat.

I can’t say that the particulars can be sussed out from such a short appearance, but the poet (for reasons of alliteration, mind) mentions that she is a “freeborn woman” (“freolic wif”). Such a description directly contradicts Wealhtheow’s name, both parts of which (“wealh” and “theow”) translate as “slave”.

Interestingly, though, the first part of her name could also translate as “Welsh,” or “Briton.”

In the context of Beowulf‘s being an Anglo-Saxon poem it could just be that she represents the people of the British Isles that the Anglo-Saxons subjugated. So as pleasant as Wealhtheow appears at this point, I can’t help but wonder if she harbours some sort of resentment for Hrothgar. That is, of course, if the Danes represent the ruling Anglo-Saxons.

Whether representatives of something larger, or simply husband and wife, there’s definitely a tension between Hrothgar and Wealhtheow in this scene. But, that said, it wouldn’t surprise me if the poet/scribe created Wealhtheow and the tension based on the plight of the Britons who were under Anglo-Saxon rule.

Of course, there wouldn’t even need to be marital difficulties or any deeper meaning behind the tension I feel in this scene. Wealhtheow is, after all, in the position of being a sort of peace offering between the Danes and another tribe. That could be reason enough for tension, I think.

But what does it mean, though, having the ostensibly only actually British character in a poem from Britain be a woman and a wife to the king of a fading people who hold a grand old palace of a hall?

Back To Top
Straightforward compounds and the “hall cup”

Because so much of this passage is straightforward, there aren’t too many words of great interest.

Of the few compounds that are used, gamolfeax and guðrof seem like they should stick out. But the former literally means old hair or old head of hair. The latter compound, likewise has a straightforward translation as war renowned or strong in battle. There’s not really much room to wiggle around in either of these cases.

In the last part of the passage that describes Hrothgar’s reaction to Beowulf’s pledge (line 610, specifically), we’re given one compound that’s kind of neat.

The word “faest-raedne” means “steadfast.” Taken apart, translators got to this meaning by combining the security of “faest” with a word that generally means “counsel.”

That is, the word “raedne” means (aside from counsel) things like “resolution,” “deliberation,” “plan,” “way,” “design;” “decree,” “ordinance;” “wisdom,” “reason,” “intelligence;” “gain,” “profit,” “benefit,” “good fortune,” “remedy;” “help,” “power,” “might.” All of those concepts do sort of relate back to advice and advisers to some extent, but there are nuances. None of them are so far out of step as past parts of compounds, however.

Taken as a part of the larger sentence, though, “faest-raedne” as “steadfast” works with “geþoht” to shift the meaning of the clause away from simply “the people’s fervent thought” to the “people’s steadfast hope.” It’s a slight difference, but it’s still a curious one considering the elements that the poet put into place to achieve it (or, more large scale, considering how Anglo-Saxon developed to where it could express such things with this sort of nuance).

Oh, and there’s one more word that defies a simple breakdown but is still fun to speculate about. It’s the word “hall goblet” (“seleful”) on line 619.

The word “sele” is taken to mean “hall,” “house,” “dwelling, “prison,” or “tabernacle.” Given the importance placed on Heorot, this part of “hall goblet” fits most of those definitions quite nicely.

But add in “prison,” and the word fits Heorot almost like a glove. Since Grendel’s imposition, it’s a place that, for the Danes at least, is definitely prison-like.

So, taken together, “hall goblet” is just one sense of the word, the more general expression of which would be something like “sacred cup” or “exalted cup.” Basically, the sense that I get of the cup referred to with “seleful” is that it’s the one that the lord of the hall gets to use.

This cup may well have a ceremonial function, too, it being necessary for the lord of the hall to drink from this cup before any festivity or celebration really gets under way. There could also be a belief that any invited to drink from that cup shares in that lord’s glory.

More relevant to the poem, though, is the wondering that I got up to about the cup that’s stolen from the dragon in the latter half of the poem.

It’s just one cup, and it’s rust covered, but maybe it’s the hall cup of the forgotten people who used to live where the dragon took up residence. And maybe, since halls were generally places to go to be social and to drink, the hall cup represents the spirit of its hall.

As such, when the thief steals what could be the same cup from the dragon’s hoard, it recognizes the loss of this object with value beyond its physical worth and attempts to retrieve it to restore order to its hoard.

Or, when Wealhtheow fills Heorot’s “hall goblet” for Hrothgar maybe the act signifies the reinvigoration of Heorot and the Danes.

What do you think of a steadfast thought being a hope? Or of the hall cup having so much significance?

Next week we watch as Wealhtheow travels around the assembled host, doling out beer until she gets to Beowulf.