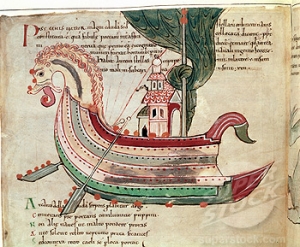 An ornate boat from a medieval manuscript. Found at http://azelina.wordpress.com/about-2/first-experiences-of-literature-and-writing/.

Unferth sets up his eventual accusation of Beowulf.

“‘Art thou the Beowulf, he who contended against Breca,
on the wide sea in a swimming contest,
where you two for pride moved as you could
and for a foolish boast in the deep water
ventured your lives? No man whatever,
neither loved nor loathed, could dissuade you two
from that distressing journey, as you rowed out to sea;
there you two eagerly covered the waters with your arms,
traversing the sea-street, moving more quickly with your hands,
gliding over spear-like waves. Ocean ripples roiled,
the winter’s surge; you two on the waters
had toil for seven nights; he who the flood overcame,
it had greater strength; so that come the morning
the sea had carried him to the land of the Heatho-Reams.'”
(Beowulf ll.506-519)

Back To Top
Unferth blasts boasts

Unferth addresses Beowulf like any one wishing to talk to someone contemptuously would: in the third person.

But what’s weird about how Unferth speaks to Beowulf in this part of his counter-boast is that he continues to talk about Beowulf in the third person after starting with “[a]rt thou the Beowulf[?]” (“[e]art þu se Beowulf[?]” (l.506))

The distancing that’s going on in this continued use of “he” definitely makes it clear that Unferth wants as little to do with the Geat as possible.

It also makes it clear that he’s holding himself aloft from Beowulf’s heroic persona.

Unferth’s relation of the swimming contest definitely doesn’t confirm Beowulf as some sort of grandiose figure. Instead it portrays him as nothing more than an idle-boaster (think of a drunk challenging all comers to whatever contest they might cook up), someone who tries to aggrandize himself through pointless challenges. Not entirely unlike a lot of modern day reality TV.

Actually, I think the implication of Unferth’s claim and that sort of TV are the same.

In fact, Unferth suggests that Beowulf not only lost the swimming contest, but in fact wound up washed ashore – the sea overcame him!

Him, the one with the power of thirty men in his grip!

Him, the one who has so pompously boasted that he will kill Grendel (if god so allows)!

On the one hand it’s easy to see how Unferth’s bringing up an old challenge is a direct attack on Beowulf’s integrity. Maybe the story of this swimming match is something that Beowulf would rather keep under wraps, and Unferth, in revealing it to all of Heorot’s gathered elite, has destroyed Beowulf’s posture of perfect warrior-hood. Or maybe it’s something ambiguous that Beowulf’s had to explain away before.

On the other hand, is there really any shame in being overcome by the sea? Especially after, as Unferth puts it, having “had toil for seven nights” (“æht/seofon niht swuncon” (ll.516-517)) on its waters?

It’s easy to see how Unferth’s sudden accusation would probably turn heads and gather all of the crowd’s attention onto Beowulf – the one who, until Unferth opened his mouth – was very clearly the focus of the Danes’ hopes for relief from Grendel.

But, I think, Unferth’s broad and accusatory tone, combined with his distancing Beowulf through the use of the third person in his accusation, also signalled to the poem’s listeners that Unferth’s threat to Beowulf’s heroic image is fiery but unfounded. His appeal to the rhetorical tactic of immediately seizing upon some hitherto unknown weakness of his target probably sounded as desperate to that early audience as it does to us, familiar as we are with political debates.

In fact, we can, I think, almost see Beowulf slowly nodding and grinning slightly as Unferth speaks, knowing full well that he can either twist the man’s version of the story to maintain his heroic image or correct it with his own version of what happened – the truth.

Do you think Unferth is just a strawman the poet set up for Beowulf to knock down? Or does he pose a real threat? Write your take in the comments.

Back To Top
Did Beowulf and Breca row or swim for their row?

The exact word that Unferth uses to describe the challenge between Beowulf and Breca is “dol-gilpe.” This word, when translated as a whole comes out as “idle-boasting.” Taken as the words “dol” and “gilpe” we get “foolish,” “silly,” and “presumptuous,” and “boasting,” “pride,” “arrogance,” “fame,” and “glory” respectively.

Cultural differences between the Anglo-Saxons and ourselves aside, the first half of the word is none too flattering, and being able to interpret “gilpe” as “arrogance” doesn’t do much for the second half. So this word’s pejorative connotation, at least in Unferth’s usage, is pretty clear to see.

Even combining one of the more upstanding interpretations of “gilpe” with any of those for “dol” gives us something like “silly glory” or “presumptuous glory.” In other words, a sort of glory that is as valuable as the sands on which Beowulf washed up. This quality of “dol-gilpe” shows that there is some meat to Unferth’s calling Beowulf out on his boastful ways.

In a way, Unferth’s even trying to get under the skin of boasting words in that using the word “dol-gilpe” could well imply that all boasts are nothing more than words.

Although the parallel isn’t perfect, it could even be that Unferth is trying to make the swimming contest and Beowulf’s challenging Grendel parallel events. Both start with idle boasting, nothing more than words, and then deeds are quickly shown to run contrary to all those words. Actually, on the level of words, Unferth could also use this compound (matters of the poet’s concern with alliteration aside) to call attention to Beowulf’s affected way of speaking, his use of stiff forms of address and of formalized rhetoric.

On the topic of words and their being void of meaning, Unferth’s “reon” in line 512 may as well mean nothing.

This word, as it appears, means “rowing.” It could also, however, mean “go by water, sail, swim.”

In the context of Unferth’s telling of the swimming contest between Breca and Beowulf this brings up a small, but niggling question: Did they row out to sea and then start swimming? Or did the two start from the shore?

As I said, it’s a very minor thing, but it is an important detail. If they did row out to sea in a boat, then it’s likely that some sort of third party was involved – otherwise that boat would have to be abandoned.

If there was a third party, he could have stopped the two, or he could have been the contests’ judge. Also, if they did go out in a boat, then maybe the race was merely from the boat to the shore. In that case it’s possible that Beowulf wound up ashore elsewhere because he tripped on the boat’s edge, fell into the sea rather than heroically leaping into it, and was washed away.

If “reon” is meant to be “swim” or “go by water,” though, and Beowulf and Breca swam for the entirety of their challenge, then it could well have been nothing more than a contest between two drunks who jumped in the ocean late at night and wound up ashore elsewhere some time later.

There may be some clue as to how deep the waters were, though, in the word “gar-secg.”

Literally translated as “spear-sea,” this word implies that the waters were choppy, the tiny waves atop it looking like spear blades pointing skyward (or, feeling like the points of hundreds of spears because of the intense chill). If the waters were that choppy, the race must’ve been a ways out to sea, and a boat was probably present. Probably. Maybe the boatman was among the “neither loved nor loathed” (“ne leof ne lað” (l.511)) who couldn’t dissuade Beowulf and Breca from their fool’s errand.

Do you think the two “rowed” out to sea, or “swam”? Leave your take on this in the comments.

Next week, Unferth’s attack on Beowulf continues. Can it get much nastier?