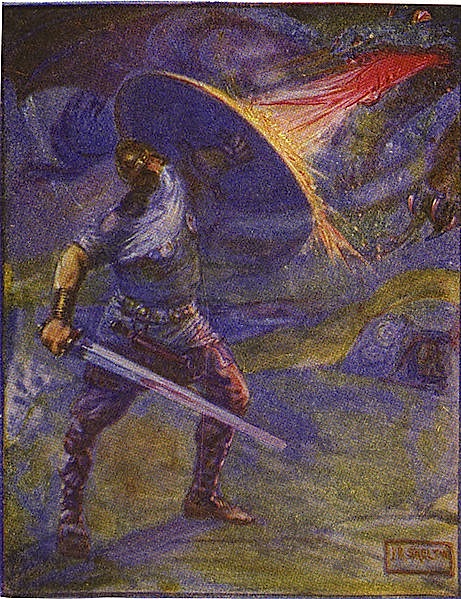 An illustration of Beowulf fighting the dragon that appears at the end of the epic poem. Illustration in the children’s book Stories of Beowulf (H. E. Marshall). Published in New York in 1908 by E. P. Dutton & Company. Image found at https://commons.wikimedia.org/wiki/File:Beowulf_and_the_dragon.jpg.

Last week, Beowulf called out the dragon and heard it call back.

Beowulf attacks the dragon, and the unexpected happens.

“The warrior below the barrow, the lord of the Geats,
swung the rim of his shield against the dreadful stranger,
then was the coiled creature with heart ignited
eager to seek battle. The good war-king
bad already drawn his his sword, the ancient heirloom,
sharp of edges, each was in horror at the intent
to harm and rain destruction evident in the other’s eyes.
He stood firmly against the towering shield,
the lord of a dear people, when the serpent coiled himself
quickly together. Beowulf waited in arms.
Then the serpent went gliding along, still coiled and burning,
hastening toward his fate. The shield well protected
Beowulf’s being and body for a lesser time
than that renowned prince required for his purpose,
that was the first time that day
that he learned he would have to prevail, though fate had not decreed
triumph for him. The lord of the Geats
swung up his hand, the one terrible in its varied colours was struck by
the mighty heirloom, yet its long-tested edge failed,
it gleamed dry, stopped by the beast’s bones, bit less strongly
just when the king of a people had need of it,
when it could have cut him free from his afflictions.”
(Beowulf ll.2559-2580a)

Well, all of Beowulf’s psyching up seems to have been for naught. He jumps in to slash the dragon, and his sword has no effect.

Worse than that, though, Beowulf’s grand plan fails him. His heavy iron shield is either heating up too much in the dragon’s fire or actually melting.

These two events are a dire turn for the poem’s hero, but are they really all that surprising? I don’t even mean because of the meta information that we have as readers. Looking at this fight with the logic of the poem in mind, it seems that it follows one of the poem’s major patterns.

Beowulf wears gear and uses weapons when he’s fighting in wars. But in two of the three one-on-one fights we hear about before this dragon fight, Beowulf triumphs when he goes in empty handed.

I mean, Grendel and Day Raven are killed thanks to Beowulf’s killer grip.

Grendel’s mother is an exception, and I’m not sure what to do with that, exactly.

I suppose her case could be dismissed since her underwater hall is kind of an inversion of the Old English Anglo-Saxon normal to begin with. A hall, to them, is a human space, but the Grendels’ hall is occupied by monsters. An Anglo-Saxon hall, generally ruled by a man, is ruled by a woman. A hall is usually warm and dry and safe, but the Grendels have their hall in a cold, damp, and dangerous cave.

But the dragon’s lair is not the inversion of a hall. It’s just a stony area near an ancient barrow by the sea. And a barrow is definitely not a hall in any sense. So bringing gear to this fight may have been deemed necessary, but it’s not surprising that his shield doesn’t work the way he hoped it would, or that his sword fails him. This is a monster fight in an ordinary place.

It’s almost as if Beowulf, this exceptional human being, took the sensible average advice of his counselors, or his people, completely forgetting that he is not average. Such advice doesn’t quite apply to him.

Of course, Beowulf would’ve been burned alive without his shield.

But I really think that a younger Beowulf would’ve just rushed in and torn the dragon’s lower jaw off, disabling its fire breath and leaving it to bleed out as he did with Grendel. The elder Beowulf, though, seems to have lost belief in his own physical power and prowess, hence his failed reliance on these specially made or imbued, but otherwise absolutely normal, pieces of gear.

Next week, the dragon launches its counterattack!