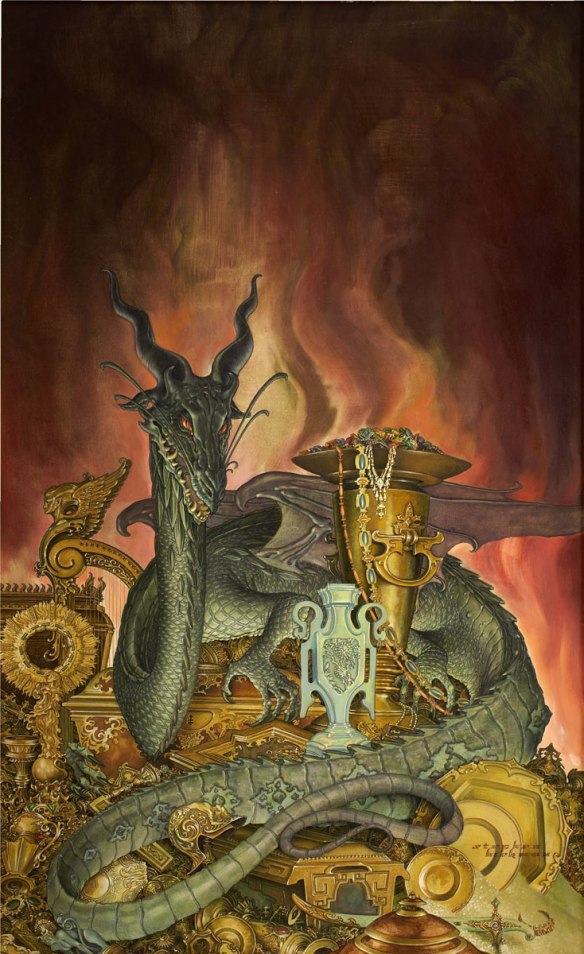 An Anglo-Saxon dragon, complete with treasure hoard. Image from http://brer-powerofbabel.blogspot.ca/2011_09_01_archive.html

The dragon realizes that his treasure hoard is missing a golden cup. He sulks around his barrow and then decides to attack the countryside.

“When the dragon awoke, strife stirred with him.
The drake moved quickly over the stones of his home, fierce-hearted.
He found the enemy’s track, the scent of he who had used stealth
and skill to creep close to his head, where the golden cup
had rested. Thus may he who is unfated to die easily survive
misery and exile, so it goes for the one who keeps
the Ruler’s favour. But the guardian of that hoard
searched eagerly along the ground, its fervent wish was to find
the one who had dealt so grievously with his cup as he slept.
Hot and fierce-hearted he often went all around
the outside of that barrow – yet not any man was there
in that deserted place. All the same, the dragon shook and postured
as if at war, as if he were in the midst of deeds of battle. At times he
took turns about the barrow, seeking that precious vessel. Immediately he
found that a man had tampered with his gold,
had his hands upon that rich treasure. The hoard guardian
waited with difficulty until evening came,
he was enraged and impatient, at last he decided
he would payback the precious drinking vessel
with hateful flames. As the day went by
the serpent seethed with desire; no longer could it
wait within the walls. Amidst its flames the wyrm burst forth,
ready with fire. That was but the beginning the terror the people
of that land suffered, and just so
it spelled a swift end to their quickly grieving treasure-giver.”
(Beowulf ll.2287–2311)

Hunting down work as a freelancer is sometimes as full-time a job as the jobs you’re hunting. This is one of those times. Which means this week’s post is another poetry only piece. I do have a question, though:

If you had to a slay a dragon how would you do it?

Would you go all out and risk doing more damage to the area than the dragon would? Or would you try to be precise and tactical?

I’d try to be as strategic as possible – a dagger in the dragon’s soft spot is the surest end.

Next week, the dragon brings fire to the countryside.