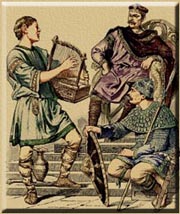 Beowulf and his crew make their way to Hygelac.

“Went he then, along with his retinue,
down the beachhead, treading over the sandy seashore,
over the broad beach. The world candle shone overhead,
the sun strove from the south. They had endured,
bravely gone, to where stood that hall of lords,
the place where Ongentheow’s killer ruled,
went to where they had heard that the young king
was doling out rings. Hygelac was quickly told then
of Beowulf’s journey there, in that word it was said
that Beowulf was in the burgh, that his lifelong
shield companion had come, that the stalwart
warrior walked within the hall, hale and hearty.
Space was cleared, as the king commanded,
those who had travelled far by foot came in.”
(Beowulf ll.1963-1976)

Most of this passage is just standard stuff. Beowulf and his crew of Geats are coming to the Geats’ stronghold, and they hear that Hygelac must be in since “the young king/was doling out rings” (“geongne guðcyning godne gefrunon
hringas dælan” (ll.1969-1970)). But what catches my eye is the reference to “Ongentheow’s killer” (“bonan Ongenþeoes” (l.1968)).

This wikipedia article makes the point that this epithet for Hygelac is a bit of an extrapolation. As the article points out (and as we learn later in Beowulf itself), Ongentheow had a few run-ins with the Geats, including Hygelac.

But it was not Hygelac who killed him. Eofor did, with the help of Wulf.

I guess part of being a king in the Anglo-Saxon style was sharing in your retainers’ accomplishments as much as it was sharing out your gold with them. Which is pretty interesting if you think of it as a glory for gold kind of equation. In such a situation, the king’s reputation swells with every great victory his retainers win while those retainers only see gold for the deeds they do.

In some ways, this system of glory funnelling up and gold funnelling down is a dim mirror of the sort of corporate system that’s in place now.

Today’s workers are faceless and ill-remembered by history, but are paid for their labour (mental, physical, emotional), while the glory of their accomplishments adds another page to history’s book in the name of their employer.

Kind of shines a new light on copyright and patents doesn’t it?

I only wish that there were more accounts of how warriors in early medieval Anglo-Saxon communities felt about having their physical needs met and station raised at the cost of their being remembered for their own deeds.

Though, I guess, then, as now, if someone wanted to make a place for themselves in history they would grin and bear losing the glory earned for their lord/employer while saving enough gold to start their own comitatus/business and strive for their place in history.

But if you grew up in a society where the greatest service was service to your lord, would you even consider stepping out from his shadow? Were there people who strove for their own individual goals back then? What do you think? Leave your thoughts in the comments.