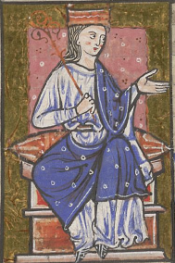 An image of Aethelflaed, fighter of vikings and the daughter of King Alfred the Great and Queen Ealhswith. Image from https://younghistorian7.wordpress.com/2014/03/18/a-look-at-some-anglo-saxon-queens/

The poet continues the story of Modthryth and what happened when she was married off.

“Indeed, Hemming’s kinsman put an end to that.
The ale drinkers in the hall told another tale:
that she caused much less trouble to her people,
favoured fewer malicious acts, as soon as she was
given to the young lord while gowned in gold,
a man of noble descent, as soon as she boarded a boat
to cross the pale waters to marry Offa
according to her father’s counsel. Once there
the woman worked well on the throne, renowned for goodness,
she made the most of her destined life-span while alive;
she maintained her deep love with the prince of warriors
among all kingdoms, as I have heard,
the best between the two seas
of all mankind. As such, Offa was foremost
in gifts and in wars, a spear-bold man,
one honoured widely, who ruled his nature
and lands with wisdom. Then Eomer was born,
a help to warriors, Hemming’s kinsman,
grandson of Garmund, powerful in battle.”
(Beowulf ll.1944-1962)

The poet ends the story of bad queen Modthryth here. But it isn’t the ending I would’ve expected from such a story.

Instead of meeting her end as fated retribution for her wickedness, Modthryth is married off to another man.

It’s unclear if this is because Modthryth was more princess than queen or if her husband was killed. Unfortunately, I don’t have any information about her family tree, so I can’t really say much about why she’s suddenly eligible for marriage here.

However, it is clear that the story that the “ale drinkers in the hall” (“ealodrincende oðer sædan” (l.1945)) tell differs quite a bit from what we heard last week.

This time around Modthryth (at least, I think the poet’s still talking about Modthryth — Old English poetry can have some unclear pronouns at times) is a model queen. She changes so much in fact, that she becomes “renowned for goodness” (“gode, mære” (l.1952)). But that’s not enough. She also seems to help Offa become a better leader.

This point in particular is important to note because it illustrates the good that can come out of a good marriage. It can mellow a woman out (a chronic issue in a fair bit of medieval literature), it can help a man be better, and, in doing those two things, it can fulfil what I’ve always seen as a Christian imperative for marriage: enable the mutual and reciprocal improvement of the partners involved.

That such a lesson be included in Beowulf (even in one of the poet’s asides) definitely shows how Beowulf has been Christianized.

True, the reciprocal improvement of the members of a married couple is probably also celebrated in non-Christian contexts, too. But presenting such a terrible portrait of Modthryth before talking about how marriage redeemed her gives her an arc that’s got far too much to do with redemption for me to just write it off as the Beowulf poet sharing with us some universal lesson.

Not to mention the implication in last week’s passage that Modthryth’s earlier husband (or father?) lacked the power to control her. As a result she inflicted a dire punishment on any other man who looked at her.

But, Offa is a celebrated warrior of history and legend. As such he is powerful enough to control Modthryth, and the idea that women can only do good when controlled (or at least matched with an equal) seems like a very non-pagan idea to me. Boudica was fine on her own after her husband’s death, and women generally commanded respect in early medieval Germanic societies (for spiritual insight or otherwise). But I can’t think of a single Christian story about a woman who was generally respected or defiant to the end except for those who were in the service of god and wound up as saints.

But what do you think of this turnaround for Modthryth? Is it evidence of the Christian influence on Beowulf? Or does it say something about how the Anglo-Saxons and other Germanic groups viewed women and marriage’s potential effects on them? Feel free to discuss your thoughts in the comments!

Next week, the poet gets back to Beowulf and his meeting with Hygelac.