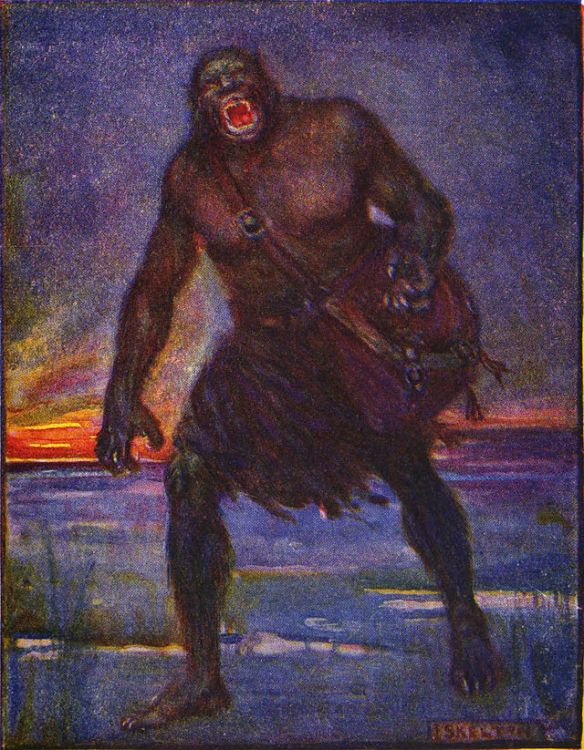 An illustration of Grendel by J.R. Skelton from Stories of Beowulf. Grendel is described as “Very terrible to look upon.”Stories of beowulf grendel” by J. R. Skelton – Marshall, Henrietta Elizabeth (1908) Stories of Beowulf, T.C. & E.C. Jack. Licensed under Public Domain via Wikimedia Commons.

The Geats and Danes kill one of the monsters of the waters and drag it ashore.

“One of the Geats
severed the life of one with an arrow from his bow,
than did it battle against the waves, since that war arrow stuck in
its side; it was then slower against the waters
in that sea, until death took its fight away.
It was quickly pulled from the waves
in an assault of savagely barbed boar spears,
fiercely they attacked it to tug that wondrous
traverser of the waves to the shore; the men
all gazed upon that terrible stranger.”
(Beowulf ll.1432b-1441a)

Back To Top
Brutal Curiousity

There is no way to soften the blow here. The Geats and Danes are downright brutal with this sea monster — be it seal or walrus or actual monster.

First, it’s struck with an arrow. Then they all watch as it goes through its death throes in the water, no doubt bloodying them up further. But then they don’t just look at each other and grunt out “huh, I guess they can die.” No. Instead they stick spears intended for hunting boars into the corpse and bring it ashore for a closer look.

At least I guess I should credit them for being curious. I mean, these guys don’t just kill the thing and then leave it there. There’s a genuine inquisitiveness present in this passage. It’s just that it’s pretty deeply cut by a brutal kind of caution. Cut so deep in fact, that the metaphorical drink it’s diluting is just about all water at this point.

Still, the assembled warriors all gawk at the corpse of this animal (monster?) that they’ve pulled to shore. Which does accomplish a few things for the story.

As I noted above, it proves that these monsters can be killed. It also proves that they aren’t likely impervious to human weapons like Grendel was. Though I’m not sure how top of mind that is and how much more likely it is that they killed the beast to make sure it didn’t attack them when they tried to get a closer look. Though, it’s still hard to set aside their letting it thrash around in the water until it dies.

It doesn’t get mentioned here, since next week’s passage will jump back to Beowulf himself, but maybe this closer observation of one of these monsters confirms something very important for the Geats and Danes around it. That it’s no monster at all.

As a sea-faring people, I have no doubts that both Geats and Danes are familiar with sea-life, whether helpful or harmful to their crossing the seas. Maybe this closer look is all it takes for them to realize that the creatures in the water here aren’t monsters at all but just creatures as common as deer. And maybe that’s why this is the moment that the poet chooses to end his general narration before getting back to the heroics of Beowulf.

Unless, this creature is indeed a monster, or just monstrous. Last week there was the mention of these creatures all around them being the same ones that were responsible for wrecking ships on their way out to sea. Maybe seeing these creatures up close didn’t lead to a revelation about their nature, it just erased the fear that all the assembled people had for these beasts as these strange and unknown creatures. But, now, at the very least, as Arnold Schwarzenegger rightly observed in a movie about another monstrous menace, Predator: “if it bleeds we can kill it.”

What do you think? Are the Geats and Danes killing, then jamming boar spears into this creature’s corpse out of fear? Or just because they want to be sure about its nature and their own safety? Let me know what you think in the comments!

If you’re a sea-going creature, you’ve spent your whole life in the water. You know the ebb and flow like the back of your fin. You truly are a “wæg-bora”1.

But the ways of the air are entirely foreign to you. The area above the water is where the great fiery ball lives, far off in the distance. Or it is simply quite small. None of the stories of your kind are certain. But they are certain that the space between water and fiery ball is usually clear and open. So being hit by sharp barb, or “here-stræl”2, from a “flan-boga”3 is entirely unexpected. Hard clouds sometimes pass along the surface of your waters, but stories of those sharp long barbs are few.

But they are brutal.

Especially since there are many mentions in these stories, talk of “heoru-hocyht”4 “eofer-spreot”5 being driven from an unknown enemy that lives in the space between waters and the fiery ball. Those who have witnessed such assaults with the barbs that swim through the space between often tell of these greater barbs following their smaller kin, just as certain of your own kind swim together. But instead of bringing the joy and safety of community, these barbs always cause great “yð-gewinn”6.

Such are the dangers of being a child of the waves.

Next week, the poet shifts back to Beowulf. And the Geat hero gets geared up.