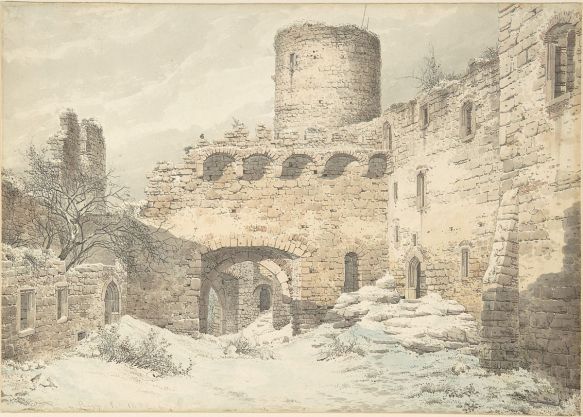 An illustration by Carl Julius von Leypold entitled “Winter View of the Courtyard of a Medieval Castle in Ruins”. Image from https://commons.wikimedia.org/wiki/File:Karl_Julius_von_Leypold_-_Blick_auf_einen_winterlichen_Innenhof_einer_mittelalterlichen_Ruine.jpg

First off, happy belated New Year, everyone! I feel like I missed the window for the usual new year goals type entry, but at least as far as this blog is concerned I only have one goal this year: finish my translation of Beowulf and release it as a book.

So, how is that going?

Well, as you might have guessed, it’s been slower than expected. Originally I was aiming to release the e-book (at least) by January. That is looking unlikely right now.

What’s Left to Do

As of this writing I’m at the point where I’m making sure that my pronouns for and capitalizations of God are all consistent with each other. Then I need to go through the poem and check to see if every use of “then” is helpful or hurtful to the poem’s flow.

Next, writing the translation as I did, piece by piece, made it very easy for words to repeat in quite close proximity. Though the original Old English seems to use “then…” quite a bit as well. Why not just leave those as is?

Well, one of the things I am completely done with is coming up with a subtitle for the translation (it wouldn’t do to just release this project as “Beowulf” after all, at least not for SEO reasons). And the subtitle that I settled on is “A Mostly Modern Verse Translation”. The resulting catch, at least for my editing, is the “Mostly Modern” part, since I want it to say that this translation of Beowulf, though trying to maintain the ancient feel of the original, is not completely unassailable by someone who’s never read Beowulf (or any Old English poetry) before. And it’s a completely stylistic choice to change some of the direct translations from the original to accomplish that goal.

After those steps are completed, and any other issues that came up in the process of working through them are also cleaned up, I’m going to do another complete spoken read through of the poem to make sure that everything sounds good. And, finally, once that’s done, I’ll be moving onto the part that might just make my translation a little unique: the blog-style commentaries that I’ve created along the way.

These commentaries will be tidied up as needed themselves, and then added to the main text as endnotes. At least in the ebook edition, these endnotes will be conveniently accessible via hyperlink. In the paperback version (which is something I want to get off the ground a little after the ebook release), they’ll just be left as endnotes since if they were added as footnotes there would likely only be a few lines of the poem per page.

Three Books from One

Once both of these components of the complete book are finished, I’m going to release them both in one book, of course. But, on the advice of a friend, I’m also going to release the commentaries and the poem itself in their own versions as well. At least initially, these two will have different covers since my starting budget for this project almost entirely went to the complete version’s cover, which I’ll reveal in the next update post.

And there you have it. Those are the steps that remain between me and publishing this translation. So, what kind of a timeline am I looking at?

Well, optimistically, since I’ve taken up a day job in retail, all three versions of the book should be available as ebooks by the end of February. Though I plan on setting up pre-orders at least two weeks in advance of when I am 100% sure it will be available.

I will confess that this later release date is a bit disappointing, since I was kind of hoping to ride in the wake of Maria Dahvana Headley’s translation which released right around the switch from 2018 to 2019 (and is available here, if you’re curious). But, this way I don’t have to worry about that wake drowning me out, so it’s not all bad.

With that, thanks for checking in on this blog.

It’s time for me to get back to editing. I’ll try to check in here again at least every two weeks with updates until the paperback is out.

Until the next update, may you all be hale and hearty!