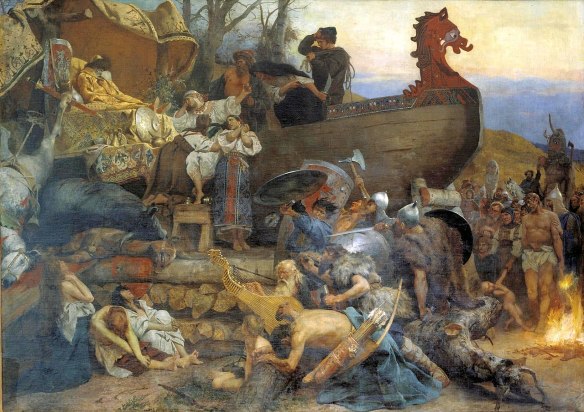 Then it was seen that the journey for
that which was hidden in the earth swell
was for nought. Its guard earlier slew
that one of joy, though that one worked the feud,
and worked it wrathfully. It is a wonder
where any great man famed for courage will meet the end
of these loaned days, when he may no longer
dwell with his kinsmen in the mead hall.
So it was with Beowulf, when he the barrow’s
guardian sought, a cunning enmity. None can know
through what means his own parting from this world will be.

Just so the renowned princes solemnly declared
a curse upon that which they placed there until doomsday,
that the man would be guilty in sins,
confined in idol’s shrines, held fast in hell-bonds,
tormented in evil, whoever plundered that place,
unless he had earlier perceived
the gold-giving lord’s favour.

“Oft it happens that one warrior’s wish makes
the many endure misery, just so it has happened with us.
We could not persuade that dear prince,
this guardian of the people would not accept any counsel
to not attack the gold guardian then,
to let it lay where he long was,
to let it remain in that dwelling place until the world’s end,
to keep his exalted destiny. The hoard is
bitterly won; it was fate that impelled
that king of a people to that hard place.

“I was in that place and looked over all that was there;
through that building of precious objects I had to clear a
path. Not at all in a friendly way was I granted passage
in the place under the mound. I in haste grasped
much in my hands of a mighty burden
of the hoarded treasures, out to here I carried it
to my king. He was alive yet,
wise and aware; a great many things
the old one said in grief, and ordered me to greet you,
ordered that you should build after the friendly lord’s
deeds a lofty barrow there in the place of the pyre,
mighty and renowned, just as he among men was,
worthiest warrior widely throughout the earth,
while he could enjoy the wealth of a stronghold.

“Let us now hasten to another time,
to see and seek out the pile of finely worked jewels,
the wonder under the wall. I shall guide you,
that you shall look upon abundant
rings and broad gold near at hand. Then ready the bier,
swiftly prepare it where we come out,
and then ferry our lord,
beloved of men, to where he shall long
in the Ruler’s protection remain.”

Commanded then the son of Weohstan, gave
the fighters orders, bold in battle, like a warrior among many,
as one who owns a hall, that they might
bring wood for the pyre from afar, for the good man,
that leader of a people:

“Now shall fire consume all
— he shall grow dark by the flames — the ruler of warriors,
he who often endured the shower of iron
when the arrow storm was sent from the bow
over the shield wall, the shafts fulfilling their duty,
arrowheads aided by hasting feather fletching.”

Indeed the wise son of Weohstan
summoned a band of the king’s thanes,
seven together, those who were best,
he went with seven others, warriors,
under the evil roof. One bore in hand
a flaming torch, the one who went at the front.
There was no drawing of lots for the plundering of
that hoard, when the men saw that all parts of
the hall remained without a guardian,
for he lay wasting away; few of them grieved
as they hastily carried out those
dear treasures. They also pushed the dragon,
the serpent they slid over the sea cliff, let the waves
take him. The sea enfolded that guardian of precious
things. Then was wound gold loaded onto wagons,
everything in countless numbers before the prince was borne,
the old warrior brought to Whales’ Ness.

For him the Geatish people then made ready
the splendid pyre in the earth,
hung round with helmets, with battle shields,
with gleaming mail coats, as he had requested.
Then they laid the renowned prince in the midst of
lamenting warriors, that dear lord.
The fighters then proceeded to kindle
that great funeral fire; wood smoke rose up
black over the blaze, the flame roared, mingling
with weeping — the swirling wind subsided — until
that blade had broken the body, proven hot to the
heart. Sad at the source, it threw about sorrowful
heat, and lamented grievously, killing the liege lord.

Also a Geatish woman’s song of mourning
[ . . . ] with hair bound up
for that sorrowful song; they said repeatedly
that they dreaded sorely an invasion,
an abundance of slaughter, terror for the company of men,
humiliation and captivity. Heaven swallowed the smoke.

Then built the Geatish people
a burial mound on the headland, it was high and broad,
for seafarers it was widely visible,
and in ten days they built
the monument for the one bold in battle. They built
also a wall around the remnants of the fire, as
the wise men had most worthily devised it.

They placed Beowulf in the barrow with rings and jewels,
all such adornments as were before in the
hoard of the hostile minded one that men had taken.
The warriors left the wealth to be kept by the earth,
gold in the ground, where it yet exists
as useless to men as it previously had been.
Then around the barrow of the brave in battle they rode,
the sons of noblemen, twelve warriors,
they would lament with their sorrow and mourn their king,
uttering dirges and speaking about the man;

They praised him for his heroism and his courageous
deeds, which were judged highly, just as it was fitting
that the men laud their friend and lord prince with
such words, love of their hearts, when he
shall lead out his soul from his body.

Thus lamented the Geatish people
for the fall of their lord, their hearth companion.
They said that of earthly kings he was
the mildest among men and most gracious, the
kindest to people and most eager for fame.

Thank you very much for reading my translation of Beowulf! Feel free to email me at nsczach@gmail.com if you have any constructive feedback to share.