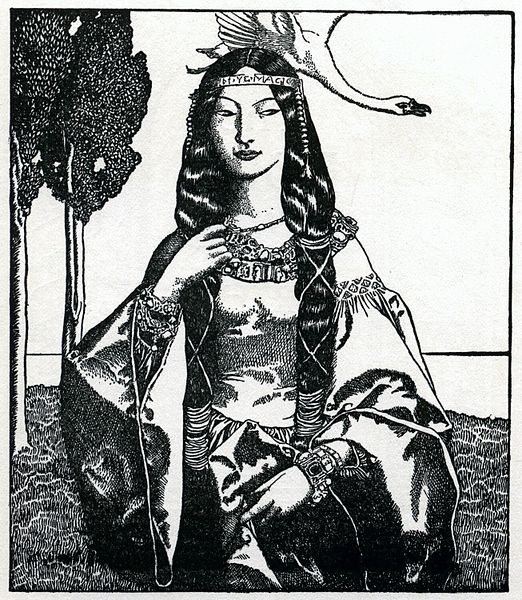 If Wealhtheow is like Guinevere, then Grendel’s mother is like the Lady of the Lake: the more volatile and magical side of femininity. Image from https://en.m.wikipedia.org/wiki/File:Arthur-Pyle_The_Lady_of_ye_Lake.JPG.

Departed then the warriors to go to their homes
deprived of friends, scattered across Frisia,
their homes and their strongholds. Hengest there yet
dwelt, through the slaughter-stained and all ill-fated winter
with Finn; filled with thoughts of home,
though they might not sail the sea upon
a ring-prowed ship; the sea heaved with storms,
winds fought upon it; the wintry waves were locked
tight with binding ice, and would be until came
another year to the world, as it yet does,
as the seasons are still observed,
bringing gloriously bright weather. Then would winter depart,
leave the earth’s fair bosom; the exiles were eager to go,
the strangers in the hall; but then they thought more
of revenge for their injury than of putting to sea,
if they might bring about a hostile encounter,
that the son of Jutes may have his crime etched in his heart.
So he could not refuse the law of the world,
when to him Hunlafing gave War-Radiance,
the best of swords, placed it into his lap,
that was amidst the Jutes a known weapon.
Just so, it later befell Finn, the bold in spirit,
that he was cruelly killed in his own home,
suffered the dire attack after Guðlaf and Oslaf
spoke of the sorrow of their sea voyage,
all blamed their share of woe on Finn, nor might the restless spirit
restrain itself at heart. Then was the hall made red,
red from the blood of their enemies, likewise was Finn slain,
king of the troop, and they seized the queen.
The Scyldings also bore away to their ships
all that had belonged to the lord of that land,
whatever within that hall they could find of
jewels, fine-worked gems. Then they left with that noble lady
on the sea voyage to Daneland,
lead her back to her people. Then the song was sung,
the entertainer’s tale. Revelry again arose,
the noise among the benches flashed as the cup bearer brought
joy from/the joy of the wondrous vessel. Then Wealhtheow came forth,
going under the weight of golden rings, over to where
the two sat, nephew and uncle; there yet were those kin together,
each to the other true. Also there sat spokesman Unferth
at the foot of the Scylding lord’s seat; each of them to his spirit trusted,
that he had great courage, though he to his own kin was not
merciful at the swordplay. Spoke then the Scylding lady:

“Take of this fullness, my noble lord,
treasure bestower while you are in joy,
gold giving friend of men, and to the Geats
speak mild words, as anyone shall do;
be with the Geats glad, be mindful of their gift
from near and far that you now have.
My man has said, that you for a son this
warrior would have. Heorot is cleansed,
the bright ring-hall; use, while you will,
your many joys, and to your kin leave
the folk and kingdom, when you shall go forth,
as fate foresees. I myself know
how gracious Hrothulf is, that he will defend
the honour of the youth, if you before him,
friend of the Scyldings, leave this world;
I believe that he will liberally repay
our two sons, if he recalls all the care we’ve given him,
the favour and honour* that we showed him
while he was a child** and still growing up.’
She turned then from the bench, there to where her sons were,
Hreðric and Hroðmund, and to the hero’s son,
all the youths together; for there the good man sat,
Beowulf the Geat, there between the two brothers.

“To him the cup was carried and cordial invitations
offered in words, along with wound gold
bestowed with good will, armbands two,
garments and rings, the greatest neck-ring
in all the earth, as I have heard.
Not anywhere else under the sky have I heard of a finer
hero’s hoard treasure, not since Hama bore away to there
the magnificent necklace of Brosing,
jewels fixed in precious setting; when he fled
the cunning enmity of Eormenric; chose eternal gain.
Then the ring had Hygelac the Geat,
Swerting’s grandson, wore it on his final raid,
during that time he defended the treasure under his banner,
protected the spoils of the slain*; but he was carried off by fate,
since he for pride’s sake sought trouble,
bore feud to the Frisians. Yet he carried those adornments away,
took the precious stones over the wide waves,
that mighty man; he fell dead beneath his shield.
Then it passed from the king’s body into the grasp of the Franks,
his mail-coat and the circlet also;
the less worthy warriors plundered the slain,
after the battle carnage; the Geatish people
occupied a city of corpses. The hall swelled with sound.
Wealhtheow spoke, she before the throng said this:

“Enjoy these rings, dear Beowulf,
young warrior, be with health, and this garment use,
our people’s treasure, and prosper well;
show to these youths your strength, and to them
offer kind advice; I for this reward shall remember you.
You have brought it about, so that far and near
forever among men shall you be praised,
just as widely as the sea encompasses
the home of the wind, the jutting cliffs. Be, long as you live,
prince, blessed! I wish to you great
treasure. Be you to my sons
of kind deed and joyful!
Here each man is to the other true,
of mild heart, under our lord’s protection;
the warriors are united, a people fully prepared
these men all have drunken the pledge and do as I command.”

She went then to her seat. There was the greatest of feasts,
men drank great wine; none knew the fate that awaited,
a dolorous destiny, as it would again
and again befall the many, after evening came,
and Hrothgar had retired with his entourage to his chamber,
the ruler gone to rest. The hall was guarded
by warriors without number, as they had oft done before;
the bench boards were cleared; the floor was enlarged
with bedding and pillows. One reveller
was marked and doomed on that couch to depart.
They set at their heads their battle-shields,
the bright shield-wood. On the benches behind the
princes who’d watched the waves
were the helmets that towered in battle, ringed mail-shirts,
glorious spears. Such was their custom,
to be always ready for war,
whether at home or out plundering, or at any time
that their lord showed signs of
need for rallying; that was a brave people.

Sank they then to sleep. One man paid a dear price
for that evening’s rest, as they went to it as they would
in the gold hall before Grendel occupied it,
ruled with terror, until his end came,
death after such dire crimes. They then became manifest,
those deeds of the widely known man, that avenger then yet
lived after that hateful one, for a long time,
while he wallowed in war wounds. Grendel’s mother,
that hag, the one with a woman’s misery in mind,
who was made to inhabit fearsome waters,
who lives in cold streams, after Cain became
the slayer by the sword of his own brother,
kin by the same father; he fled as an outlaw for that,
marked with murder, fled from the joy of companionship,
occupied the wilderness. Thence was born
that terrible fate; that was hateful Grendel,
the savage outcast, then at Heorot he found
a watchful man waiting for war.
There that man seized the monster;
nevertheless he was mindful of his great might,
an ample allotment of strength, that which God granted him,
and he trusted in the Ruler’s favour,
comfort and support; through that he overcame the fiend,
laid the hell beast low. Then he humiliated went,
deprived of joy and seeking the dwelling of death,
thus went the enemy of men. And his mother would yet
come, gluttonous and gloomy in mind,
on her joyless journey, all to avenge the death of her son.
It came then to Heorot, where the ring-Danes
within that hall slept. There would soon be
a reversal among the warriors when
in came Grendel’s mother. The terror she inspired
was only lessened slightly, as a woman warrior’s might
may be against the great strength of an armed man
when with ornamented sword, hammer forged,
blade bloody and raised over the boar helm,
the sharp edge shears the opponent.
Then in the hall were swords drawn,
blades pulled over benches, many a broad shield
held firm in hand; but they paid no mind to helmets,
or the battle shirt, when terror returned to the hall.
She was in haste, she wished to be away from there,
to save her life, since she had been discovered.
Quickly, before she went, she seized one
man fast, as she fled to the fens.
That man was Hrothgar’s dearest warrior,
his closest companion of all people living between the seas,
a powerful shield-warrior, that was the man she killed while at rest,
that famed fighter. Beowulf was not there,
he had been assigned a different resting place earlier,
during the gift giving for that renowned Geat.

Uproar burst forth from Heorot — to pay the blood cost
the mere-woman had seized the best known hand. Sorrow was renewed;
it had happened again in that hall. Their trade was harsh,
both parties had to pay a steep price
with the lives of friends. Hrothgar was now an old king,
a grey-haired battle-ruler, troubled at heart,
when he had heard his chief retainer was lifeless,
when he learned his dearest follower was dead.
Quickly Beowulf was called from his chamber,
the man blessed with victory in battle. At daybreak
came the one man, that noble warrior,
himself among companions, to where the wise one was,
he who wondered whether the All-Ruler would ever
reverse his sorrowful fortunes in the future.
Went then over the floor the man renowned in battle
amidst his hand-picked troop — the hall’s timbers resounded —
so that he could address the wise one with words,
the lord of the Ingwins; asked him how he was,
if the night had fulfilled his wishes.