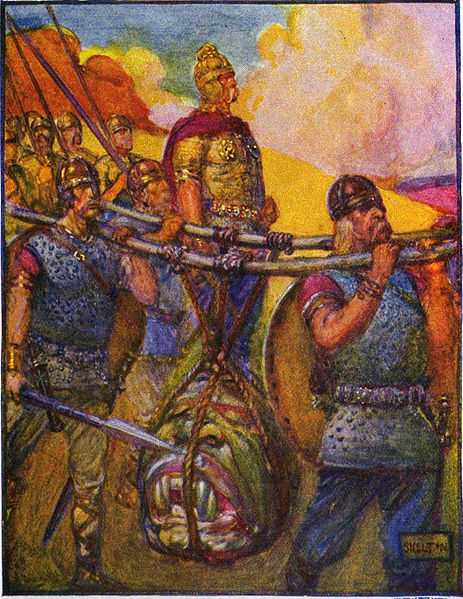 Beowulf emerges from the Grendels’ lake and is gratefully met by his fellow Geats.

“Then came the seafarer to the safety of land,
swimming stout-heartedly, joyous with his sea-spoils,
the amazing burden that he had with him then.
They all flocked to him, thanked god,
that mighty heap of thanes, took delight in their chief,
that they were able to see him safe again.
Then they were busied with the swift unbinding
of helm and byrnie. The lake’s surface stilled,
the sky was again visible within, though dappled in blood.”
(Beowulf ll.1623-1631)

Back To Top
A Quieter Ending Grants Greater Closure?

As Beowulf resurfaces we see his thanes crowd around him, giving their thanks and feeling overjoyed for his safe return. Then they take his armour off as the poet reflects on how the lake is stilled. Though there is still some blood at the surface.

This little section of the poem does a lot to signal that the battle is over, and in a much more meaningful way than the parts of the poem that followed the fight with Grendel.

After that fight we saw Beowulf being loudly celebrated by the Danes and heard the story of Sigemund and the the dragon. There was feasting and festivities almost immediately after the victory.

But, here, by the side of the Grendels’ lake, we just get a man’s loyal retainers thanking god for his safe return and removing from him the garb of battle. The exuberant celebration around the defeat of Grendel is very satisfying, but the quiet reception Beowulf gets after leaving the lake is much more conclusive.

Not unlike what comes after the climax in the classical arc of a story.

As Aristotle put down in his Poetics, after the climax of a story there’s the denouement.

The denouement is the part of the tale where the hero settles down and the new normal (whatever that may be) sets in. It’s the part of a story where the audience can settle back into their seat after spending the previous part of it on its edge and reflect on what just happened. It’s the critical down time where you can bask in the glow of the story that’s just been told while still being in it.

Actually, most superhero movies spring to mind when I think about the ending to this adventure of Beowulf’s compared to the end of the adventure with Grendel.

By the end of the first movie in a planned trinity there’s a loose thread or two that aren’t tied up by the time the credits roll. And, now, more and more, there are even more loose ends presented after the credits. A more conclusive ending doesn’t come until the third movie.

As such, that first movie is just like the fight with Grendel, there’s much fanfare for the victory, but the savvy reader can see the signs that there’s more to come. In a way, Beowulf’s victory over Grendel was “too easy”.

After finishing the fight with Grendel’s mother, however (and taking Grendel’s head), there is no fanfare. No stories are raucously told. No gifts of gold or horses are promised and presented. Instead, Beowulf’s armour is undone not by his hand, but by those of his men.

I can’t say for sure, but to me this gesture betokens a great deal of closure. The actor, Beowulf, isn’t just taking off his costume to prepare for the next scene. His captive audience, his fellow Geats, are removing that costume, as if to say, “we, the audience, acknowledge that the story’s over, you’re free to go.”

As shows like Deadliest Catch illustrate, any “lid-mann”1 who goes out after crab is indeed “swið-mod”2. But you’d have to be to haul in such a “sæ-lac”3 as those crab, that “mægen-byrþen”4 taken in by net. And all without the “wæl-dreore”5 being spilled between crab and “lid-mann,” though the sea and the elements are much fiercer fighters.

Next week, Beowulf and the Geats head back to Heorot.