Synopsis
Translation
Recordings
What was Grendel’s Mother Thinking?
A Wound for a Wound, a Sword-Stroke for a Sword-Stroke
Closing 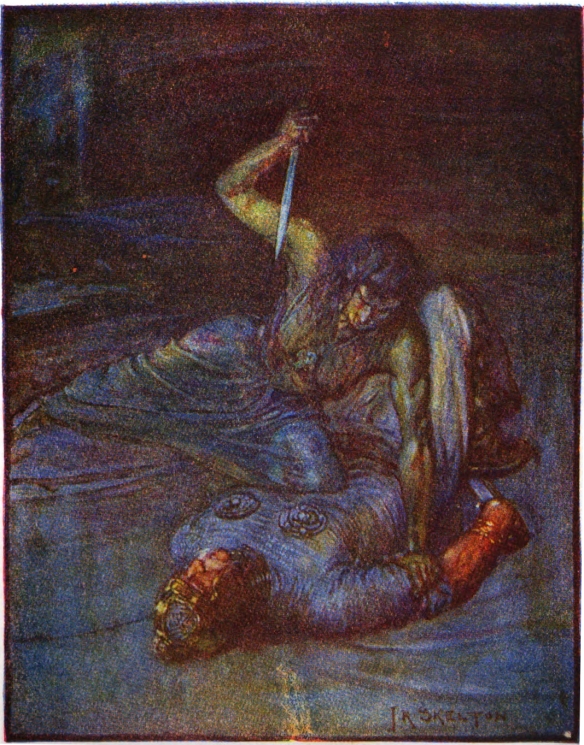 Beowulf uses the sword that slew Grendel’s mother to finish off his wounded body.

“A light shone, brightened the hall from within,
made it as bright as the great candle
set in the heavens. He looked about the hall;
turned toward the far wall, with weapon raised,
its hilt hard up against ambush, Hygelac’s thane,
emboldened and resolute. That edge had proven
all but useless to that fighter, and he sought to use it
to avenge all of Grendel’s awful attacks,
each of the monster’s missions against the West-Danes,
many more than one occasion when he alone
slunk into Heorot to slay Hrothgar’s hearth-companions
who were all were asleep, devoured fifteen Danes
while all slept as if dead,
and made off with as many others,
a loathsome booty. Beowulf paid him his reward,
the fierce fighter, for there he saw laid out
the wounded body of Grendel,
now life-less, his grim energy drained through the injury
he bore from the fight in Heorot. His body was wide open
since he endured that death blow.
One hard sword-stroke severed his head from his body.”
(Beowulf ll.1570-1590)

Back To Top
What was Grendel’s Mother Thinking?

All revved up from killing Grendel’s mother, Beowulf’s bloodlust draws him to take Grendel out, too. Why was Grendel there in the first place? I can only imagine that his mother had been tending to his wounds. Or, maybe she was just mourning him. Or maybe she tried to save him, but couldn’t, and she had been in the midst of preparing Grendel’s body for its final send off when Beowulf dove into their lake. However I can think to explain it, it comes back to Grendel’s mother doing something with Grendel’s body because she recognized it as more than just some thing. Like a human mother she valued her son’s life and his dismembered body was her last reminder of that. So, chalk up another one in the “human” column for the Grendels.

I kind of wish the poet went into more detail here, though. I mean, even if they were put into exile because they were the original inhabitants of where Heorot now stands, or because Grendel was rejected from society at birth, or because they’re the last remnants of a long since defeated tribe, I’m really fascinated by what’s going on in this underwater hall.

You’ve got two people living in this hall who tend to stay out of sight, there’s an armoury with a giant’s (or Roman?) sword, and a ceremoniously placed body of a dead loved one. What’s the story here in casa (or cueva) Grendel?

Unfortunately, we’re left guessing as Beowulf pays no mind at all to any of this. Nope, he’s got heads to lop off and places to go, a thane on the rise, this one.

Speaking of, even though it might seem like literally adding injury to injury, Beowulf’s taking Grendel’s head isn’t too weird. I’m not sure if this is a reason for trophy hunters taking animal heads as well, but I think Beowulf’s actions here come back to an ancient (Northern) European belief. This is the idea that the head is where everything important to a person (what some might call the soul) is housed. So in cutting off Grendel’s head, he’s laying claim on the beast’s very soul.

Do you think Grendel’s mother was trying to help heal her son, or was his body laid out to be mourned? Leave your thoughts in the comments!

At least, if The Battle of Maldon and what it says about “heorð-geneatum”6 and their loyalty to their lords holds any water.

Next week, the story shifts back to the Geats and Danes waiting around the shore of the lake.