Abstract
Translation
Recordings
A Story Told While a Studio Audience Leers?
Some Compound Words in a Sequence
Closing 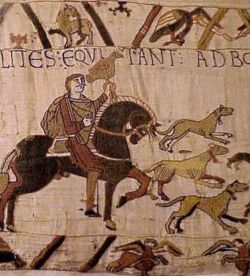 We hear the other half of the story of the torc that Wealhtheow is giving Beowulf and the revellers in the hall love it.

“Then the ring had Hygelac the Geat,
Swerting’s grandson, wore it on his final raid,
during that time he defended the treasure under his banner,
protected the spoils of the slain*; but he was carried off by fate,
since he for pride’s sake sought trouble,
bore feud to the Frisians. Yet he carried those adornments away,
took the precious stones over the wide waves,
that mighty man; he fell dead beneath his shield.
Then it passed from the king’s body into the grasp of the Franks,
his mailcoat and the circlet also;
the less worthy warriors plundered the slain,
after the battle carnage; the Geatish people
occupied a city of corpses. The hall swelled with sound.
(Beowulf ll.1202-1214)

Back To Top
A Story Told While a Studio Audience Leers?

This passage continues the story of the torc that Wealhtheow has just given to Beowulf. Though, honestly, this half of the story is the much more relevant one, I think. After all, it opens with a mention of a Hygelac who is a Geat.

And we’ve already heard of a Hygelac who’s a Geat in this poem, he’s the one who’s the Geat’s (and therefore Beowulf’s) current ruler. Though, since this part of the torc’s story includes Hygelac’s death, it’s pretty clear that the Hygelac of the poem’s present is a descendant of, or at least named for, this famed Hygelac of old.

And why not? This historical (well, at least in that he lived in the past, whether that past the poem talks about is real or not isn’t too important within the poem itself, really) Hygelac was a true badass. He seized the torc, wore it into many battles, fought fiercely against the Franks, and died protecting it and other treasures. That last detail might sound like a waste, but I think the point is that these other treasures were so precious to the Geats that one of their greats was willing to protect them. No doubt, so little is said about these treasures though because they were fairly well known to the audience of Beowulf, or at the very least the concept of treasures — things — that you’d actually want to die for wasn’t as strange as it might be to modern day readers of Beowulf.

Anyway, in this part of the story, it’s mentioned that this Hygelac also had a very special mail coat with him. On line 452 of Beowulf, we’re told that Beowulf himself wears a mail coat that once belonged to a Hygelac.

Maybe this is Beowulf’s lord, but it’d be much more meaningful and exciting if it was this historical Hygelac’s mail coat. If it is, then Beowulf’s being granted the torc is like his receiving the second half of an ancient heirloom, or like Aragorn getting Andúril when it’s reforged from the shards of Narsil that were saved from The War of The Last Alliance of Elves and Men in Tolkien’s Middle Earth lore. If the mailcoat Beowulf has (allegedly forged by the mystical, mythological smith Wade) is this historical Hygelac’s, then Beowulf has just been doubly blessed as a warrior and only really needs an ancient sword to complete his ancestral outfit (three is a magical number after all).

Beyond the significance of a former Geat and Hygelac’s having the torc before Beowulf (its rightful owner?) has it again, this passage has a curious final half line.

After Wealhtheow has related the story of the torc we’re told “The hall swelled with sound” (“Heal swege onfeng” (l.1214)).

If this raucous cheering is because of the story of the torc that Wealhtheow just told in a bizarre non-dialogue way (given the rest of the poem’s being perfectly okay with running long), then it almost seems like the hall is cheering because the Geats lost in that battle against the Franks, the survivors, as we’re told, were left “a city of corpses” (“hreawic” (l.1214)).

That makes me think that Wealhtheow’s story of the torc is more likely the poet interjecting with a quick explanation of the torc’s significance, something that someone like Wealhtheow wouldn’t really have much reason to know. After all, based on her name, she’s likely a British Celt of some kind, or at the very least somehow related to the peoples that the Anglo-Saxons regarded as slaves (since “wealh” can mean “slave,” “foreigner” or “stranger”). So she’s not likely to know much about what to her is a foreign people’s history.

So, if this story is the poet interjecting, then the hall must just be rejoicing because Wealhtheow is giving Beowulf this torc and the other rich treasures mentioned. It must be some torc then, or, at the least, the hall must be in a merry mood if they’re willing to loudly cheer the lady of the hall giving the guest a gift. Unless “The hall swelled with sound” is just Old English equivalent of the modern day sitcom soundtrack’s “oooo!” while two characters kiss.

Do you think Beowulf’s wearing old Hygelac’s mailcoat? Or, do you think the whole hall is “whoo”-ing at Wealhtheow being so generous to Beowulf?

Back To Top
Some Compound Words in a Sequence

Well, because there’s a battle in this week’s passage, there’s a pretty good mix of compounds. To do something a little different with this section, this week I’m going to weave some of them into a bit of a sequence. But I’ll start with those that I didn’t fit into the sequence.

So, on line 1211 we find “breost-gewædu,” the Old English word for “corslet,” or “mailcoat,” either word being more or less interchangeable.

If we break “breost-gewædu” into it’s compounded words we’re left with “breost” (meaning “breast,” “bosom,” “stomach,” “womb,” “mind,” “thought,” or “disposition”) and “gewædu” (meaning “robe,” “dress,” “apparel,” “clothing,” “garment,” or “covering”). Since a this kind of armour covers the breast primarily, it makes sense that it’d be called a “breast robe,” though that’s a bit silly to say.

Then, on line 1214 we have “hreaa-wic” meaning “place of corpses.” This word is a compounding of “hræw” (“living body” “corpse,” “carcase,” or “carrion”) and “wic” (“dwelling place,” “lodging,” “habitation,” “house,” “mansion,” “village,” or “town,”). So it literally means “corpse dwelling place,” an apt name for a battle field, especially one on which battle has involved “guðsceare.”

The word “guðsceare” means simply “slaughter in battle.” But, looking at the words that combine to make this term fleshes it out (if you will).

With “guð” meaning “combat,” “battle,” or “war” and “sceare” meaning “shearing,” “shaving,” or “tonsure,” the word “guðsceare” seems like it’s expressing an idea similar to the Modern English idiom “to be mowed down.” It sounds very much like the word refers to a battle in which one side wasn’t just beaten, but they were absolutely trounced.

In such a battle as that, you’d definitely want to be something more than a warrior, perhaps one who fought with the might and audacity of two warriors? You might say, then, that you’d want to be a “wig-frecan.”

Line 1212’s “wig-frecan” simply means “warrior.” But, coming from a compounding of “wig” (“strife,” “contest,” “war,” “battle,” “valour,” “military force,” “army,” “idol,” or “image”) and “frecan” (“warrior,” or “hero”), it’s clear that this is one of Old English’s doubling or intensifying compounds. After all a “strife warrior” could just be a specialized fighter, but really it’s redundant.

What makes “wiig-frecan” cooler than the compounds that come before it in this entry though, is “wig”‘s possible meaning of “idol,” or “image.” I can’t back up this bit of speculation with any solid evidence, but this interpretation of “wig” leaves me wondering if its “idol” or “image” senses refer to “wig” being used as a shorthand for the eagles that the Roman army used as their sacred standards.

Those standards were often quite plain aside from the eagle at their top, but that’s probably for the better. If they’d had any precious stones — or “eorclan-stanas” — the Anglo-Saxons would’ve likely wanted to steal them more than fear them or associate them with strife and war.

Speaking of, though, the compound “eorclan-stanas” (from line 1208) combines “eorclan” (“chest,” “coffer,” or “ark”) and “stan” (“stone,” “rock,” “gem,” “calculus,” or “milestone”). This compound word’s neatness comes from its communicating its meaning not through just calling the stones “shiny” or “valuable” but making clear that these are stones worthy of being put into a chest or ark — they’re the sorts of things you want to keep protected and therefore, must be precious.

So you definitely wouldn’t want to have any “eorclan-stanas” on you if you were facing “guðsceare,” since those stones would likely become “wæl-reaf”. This word combines “wæl” (“slaughter,” “carnage”) and “reaf” (“plunder,” “booty,” “spoil,” “garment,” “armour,” or “vestment”) to mean “spoil from the slain,” or “act of spoiling the slain.” Which just makes sense since it’s a mix of words meaning “slaughter” and “booty.” I just wonder how the Anglo-Saxons would feel about item drops in modern day RPGs.

What’s you’re favourite of this week’s words? “Wig-frecan” is definitely mine.

Next week Wealhtheow wishes Beowulf well, and makes a special request of him.