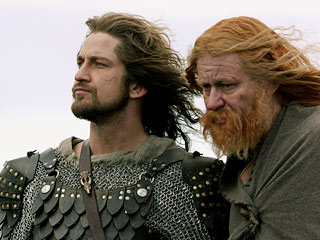 Beowulf and Grendel talking in the 2005 movie Beowulf & Grendel. Image from https://moviesoothsayer.wordpress.com/2011/05/08/the-top-10-viking-movies-part-three/.

As summer winds down, it’s important to get it into a firm headlock and squeeze as much fun out of the season as possible. Movies might not seem like the most active way to do just that, but when those movies are based on Beowulf, I think that there’s an exception to be made.

Now, there have been quite a few movie adaptations of Beowulf across the decades that film has been around. But, in keeping with this article from Folio Weekly, I’m just going to share my thoughts on three: The 13th Warrior (1999), Beowulf & Grendel (2005), and Beowulf (2007).

I remember watching this movie as part of a weekly family ritual from when I was growing up.

Every Friday my Dad, the resident movie nut, would rent two movies from the local video store. (To give you an idea of how old I am, it wasn’t until I was in my late teens that we stopped renting VHS tapes and started renting DVDs).

I could not tell you for the life of me what the other movie we rented with this one was, but I can still remember watching this movie on that long ago Friday night. I can recall sitting on the couch with a bag of chips or popcorn between the five of us, a glass of cola in my hand and Antonio Banderas playing a reluctant, unlikely hero-type early medieval Arab ambassador to the Northmen. And I definitely remember the way that the creatures he and the other 12 warriors were fighting, since they were quite well put together.

I remember much more recently reading the Michael Crichton novel Eaters of the Dead on which The 13th Warrior was based, and being much more interested in how it told the story. Crichton’s inclusion of “real” sources from Banderas’ character that back up his story was also a nice touch that couldn’t really be pulled off in a movie.

That said, though, I remember this being a fun movie that I probably wouldn’t sit down and re-watch now. Instead, I’d have it playing in the background or on my phone on Netflix as I went about my day.

One of my biggest gripes with a lot of movie adaptations of Beowulf is that they never seem to get the story right. The movie always ends with Beowulf killing Grendel. Or Beowulf winds up inheriting Heorot instead of a hall over in Geatland and the dragon he fights is really his son and in some cases all sorts of crazy liberties get taken.

Beowulf & Grendel falls into the former category, since it just deals with Beowulf’s facing off with Grendel, but it’s probably my favourite adaptation to date.

It’s also much more of a thinking movie than The 13th Warrior. Though that sets the bar pretty low since The 13th Warrior is very much a dumb action movie. Beowulf & Grendel, on the other hand, has some action sequences, but is more about really asking what it means to be a hero.

I also really love the inclusion of the Geat who’s something of a poet. Seeing him come up with lines from the poem as Beowulf’s adventures in Daneland unfold onscreen is a really nice touch.

So, yeah, this movie’s definitely one that I would turn on and be absorbed in for an hour and three quarters.

And that brings us to a movie that’s guilty of including all three of the monsters Beowulf fights but presenting those fights in weird and non-canonical ways: Robert Zemeckis’ 2007 adaptation Beowulf.

Though, with Neil Gaiman as one of the movie’s writers, you know that it’s all going to come together somehow. And, honestly, with Crispin Glover as Grendel (great casting!), Angelina Jolie as Grendel’s mother (great casting!) and Ray Winstone as the shape-shifting dragon (casting!), Zemeckis does manage to bring together a decent adaptation.

And, just as with Beowulf & Grendel, though Gaiman takes some liberties with the story’s setting, characters, and Beowulf’s relationship with them, I still see a lot of what this movie has in the original poem.

I mean, it’s entirely possible that Grendel’s mother is such a threat because of her sexuality, which means that Angelina Jolie is a fine fit. Also, in an email exchange with Victor Davis about Beowulf: A Musical Epic, he shared that when they staged their show they also had a seductive woman playing Grendel’s mother. In a poem that focuses so much on men and machismo, an enemy who is not just a monster but also an attractive woman definitely presents a very frightening threat, right?

Even Beowulf’s creating the dragon himself isn’t too far a cry from some of the themes later in the poem. I think this interpretation is particularly valid if you see the dragon as an embodiment of human greed and cunning, the very things that Hrothgar warns Beowulf about when he tells the story of the stingy and disloyal king Heremod.

So, pop this one in and get ready for a wild ride through quite an interpretation of Beowulf.

And, enjoy the rest of the summer everyone!